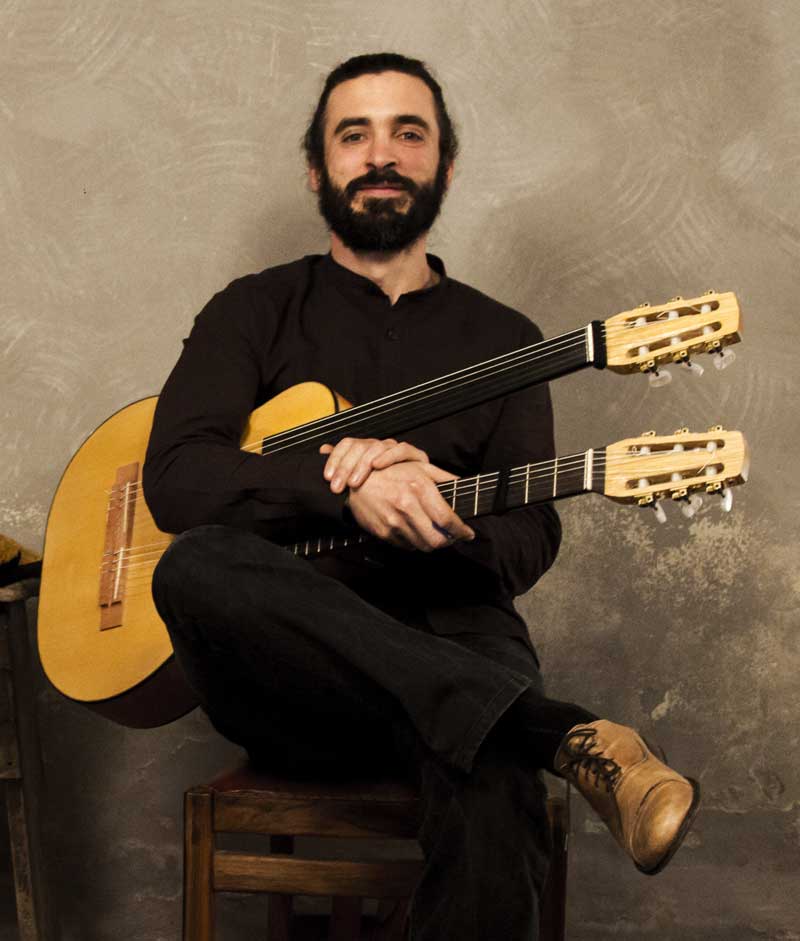 Tolga was born in Istanbul in 1977 but grew up on a small island in the north of Holland. When he was eight years old he started studying classical guitar, and some years later he switched to electric guitar, and soon after started playing gigs with local rock bands. At age eighteen he moved to Amsterdam where he discovered Jazz and Django Reinhardt's Gipsy Jazz. He took lessons from time to time, but is mainly self-taught.

His first personal album 'Bohemia' (1999), was a big success, opening doors to many national and international festivals. Since then, he has played at some of the most prestigious festivals like the Montreux Jazz festival in Switzerland, and did numerous of concerts for radio and television. He got many invitations to play in Italy, and in the spring of 2005, he decided to move there all together.

In the meantime he kept developing his music, and has just finished his ninth album as a bandleader 'Gelibolu'. On this CD, he is experimenting with a new instrument built specially for him by Dutch luthier Ger Boonstra; an acoustic double neck guitar; one of the necks is fretless. Partly thanks to this special instrument, the sound of Tolga's music nowadays is often oriental-flavoured. His music is often used by film and documentary makers, radio and television.

'Tolga is a musician who combines a unique and arresting style with a masterful technique. His music is striking yet remains pure and uncluttered.'
Turkish Daily News

'The music of Tolga is beautiful. He has a natural ability to make seem simple what is not simple. Virtuosity and excellent technique are second only to his beautiful melodic phrasing; Tolga is a very recognizable musician: if I hear him on records or on a stage with other 20 guitarists, I distinguish his mood, his sound.'
Sasà Calabrese, Peperoncino Jazz

"deserves a lot, a lot of airplay, because it is very refined, flawless and above all breathtakingly beautiful!"
Rootstime

“.. acoustic music with links to jazz, contemporary music, with latin elements, and also middle eastern influences; the sound of Tolga’s guitar here resembles that of an ud, reminding one of a Renaud Garcia Fonds. The pieces are ambitious, well-worked compositions, that let the music breathe and invite us to a dreamlike travel. Tolga shows a very natural, nicely phrased, clear sound, and plays inspired choruses that are disciplined and deeply musical. A very original and personal record, totally convincing.”
Etudes Gitanes

'Tolga shows an ever-renewed imagination, with fresh poetry and a stirring swing. Point Of View is one of the best swing manouche albums of the last five years.'
Serge Warin, Canal Blue

'Tolga is much talented, his pure articulation together with beautiful tone is a delight. His trio goes beyond and renews the genre with an assertive personal style.'
Francis Couvreux, Etudes Tsiganes

This website uses cookies to improve your experience while you navigate through the website. Out of these, the cookies that are categorized as necessary are stored on your browser as they are essential for the working of basic functionalities of the website. We also use third-party cookies that help us analyze and understand how you use this website. These cookies will be stored in your browser only with your consent. You also have the option to opt-out of these cookies. But opting out of some of these cookies may affect your browsing experience.
Necessary Always Enabled

Any cookies that may not be particularly necessary for the website to function and is used specifically to collect user personal data via analytics, ads, other embedded contents are termed as non-necessary cookies. It is mandatory to procure user consent prior to running these cookies on your website.